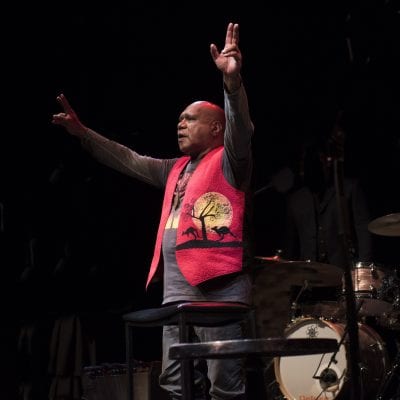 Australian singer-songwriter Archie Roach emerged in the early ’90s. His ARIA-winning debut album, Charcoal Lane, was named one of Rolling Stone Magazine’s Top 50 albums of 1992. It was centered around Roach’s heartbreaking song, “Took the Child Away,” a deeply affecting ballad about his own experience as one of the “Stolen Generations” of First Nations children who were often forcibly removed from their parents and communities and placed in non-indigenous institutions and homes. The song’s impact was immediate. It went on to receive a Human Rights Achievement Award, marking the first time that such an honor had been bestowed upon a songwriter and was added to the National Film and Sound Archive’s Sounds of Australia collection in 2013.

Archie’s career has spanned three decades. His work has been recognised locally and internationally, in mainstream and indigenous circles. He has shared the stage with some of the world’s most iconic artists, including the late Leonard Cohen, Rodriguez, Bob Dylan, Tracy Chapman, Billy Bragg, Paul Simon, Joan Armatrading, Suzanne Vega and Patti Smith. He has released 11 albums, his latest called Dancing With My Spirit.

His music speaks the stories of his people, of this land and of the human condition. His voice – uniquely Australian and undeniably universal – continues to resonate for us all.

Archie has faced his fair share of difficulties over recent years. The tragic loss of his longtime partner, collaborator and soul mate Ruby Hunter in early 2010. He then suffered a serious stroke in late 2010 followed by lung cancer surgery in 2012. Despite these challenges Archie continues to draw strength and healing from his music.