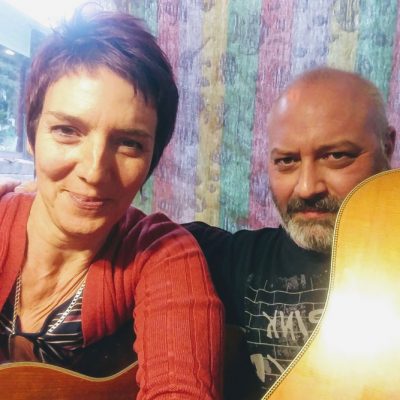 Sarah Carroll has performed at most of Australia’s high-profile festivals and a good many of its pubs over a 30 year career, and is noted for her work with GIT, The Pirates Of Beer, The Junes and The Cartridge Family. Her songs chime with sincerity and come straight from her big, brave heart.

She launched her epic progressive country album Star Parade, out on Sugarrush Music, with a national tour in 2017 and her 6th trip to the USA, where she appeared at Americanafest as part of the Australian contingent. Star Parade reached the top 5 on the Airit regional radio charts and has received golden reviews in the press as well as strong support from public radio and the ABC across the country.

Sarah and Chris’ long-time sideman Shannon Bourne have just released a 6 track album entitled Medicine which deals with the heartbreak and loss of the past year.

During the lockdown this year, Sarah and her sons Fenn and George have been performing online as Los Mariachis El Clifto! covering some of their favourite songs and streaming them from the couch at their family home in Clifton Springs.

Sarah is an experienced radio broadcaster and music writer, having most recently published an interview with one of her favourite American songwriters, Robbie Fulks in Rhythms magazine.